A book written by Kerouac, but also an apt description of my status.  I originally happened upon the John C. Campbell Folk School when I was looking for classes to jump start my education in metal work and blacksmithing.  For the past month I have been traveling visiting with smiths and trying to glean every piece of knowledge that I can while I’m on the road.

I still have so much to say about the school, the people and the pieces they made.  Tonight I’d like to share a little bit about Joey and his work.  Joey is an Alaskan boat builder by trade but is also an avid traveler.  He has traveled to the Folk school to learn about blacksmithing and has been taking classes for the past few weeks and plans to take a few more.  I took this picture on Friday before Show and Tell in the main gathering hall (Kieth House). 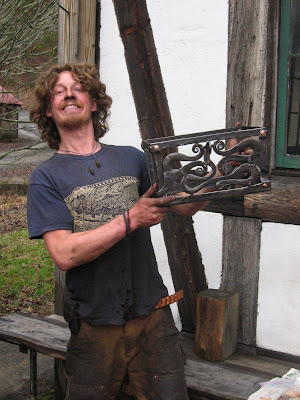 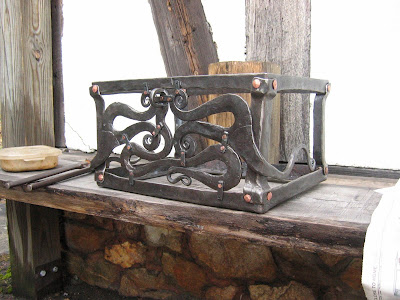 He started by bending flat stock to create a box and then proceeded to forge a metal in-lay based upon the mythological Norse tree of life. He knew what he wanted to create and was able to create it without much planning. If I’m not mistaken the box isn’t complete, I believe he is going to continue forging decorative pieces around the other sides.

I was in the forge next to him while he created this piece.  He worked critically and diligently bending and twisting his body and the piece to hit it perfectly upon the anvil.  He forge welded the corners and used rivets to bring the piece fully together.

Also during the week he created this latch for the door to the house that he plans to build.  He has already built his mother’s house and is now planning on forging and installing an iron railing for her stairs.

I was glad I was able to talk to him as much as I did. At 19 he was in the amazon with a friend or two floating down the river on a raft that they created with the machetes they carried. He’s been apple picking in New Zealand, hitch hiked with his girlfriend from NY to Montreal, worked on a pig farm in England and so much more. He has become learned through travel, funded by bouts of work, much like what I did to get to where I am now. A fun fact, he plans to turn those pants he is wearing in the picture into chaps; they’re so hardened by who knows what kind of oils and dirt and debris that they’re unwearable without long johns underneath..  Its cool that he’s recycling them, and not just throwing them out.

Working Under the Star – Part II

Embrace your creative potential, and join us for a life-changing Folk School experience. Our new January–December 2022 Catalog is now available. View the eCatalog online. To receive a printed catalog in the mail, complete our Request a Catalog form on our website.

Our online Craft Shop is now live! Support our vision, mission, and values by purchasing handcrafted items. Our online selection of items will continue to grow, so check back regularly for new items, interviews and more.

What Folks Are Saying